King County, Wash., which encompasses the metropolitan area of Seattle, filed a lawsuit against five major oil companies on Wednesday, joining a growing list of cities and counties seeking to hold the fossil fuel industry accountable for the impacts of climate change.

The new lawsuit, filed in King County Superior Court, brings claims of public nuisance and trespass against BP, Chevron, ConocoPhillips, ExxonMobil and Shell. Like other climate liability suits, it alleges the companies long ago knew about the danger of burning fossil fuels and engaged in a deliberate campaign to mislead the public about the risk. “Defendants stole a page from the Big Tobacco playbook and sponsored communications campaigns… to deny and discredit the mainstream scientific consensus on global warming,” the complaint asserts. 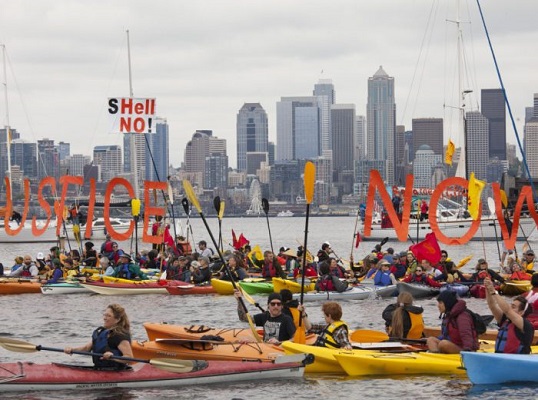 Like many communities across the country, King County experiences regular flooding tied to climate change. “The rapidly rising sea level along the Pacific coast poses an imminent threat of storm surge flooding putting areas of King County at risk of inundation,” the complaint reads. “This threat to human safety and to public and private property is becoming more urgent every day as global warming reaches ever more dangerous levels.”

The county is demanding the oil companies pay compensatory damages into an abatement fund to help cover the costs of protecting its residents and property. Attorneys for the county say those costs could reach into the hundreds of millions of dollars. The county is working with the Seattle-based law firm Hagens Berman, which is also involved in the climate liability suits filed by San Francisco and Oakland and also worked on cases that led to the historic settlement against the tobacco industry in the 1990s.

King County has committed to reducing carbon pollution 80 percent by 2050, and to purchasing wind energy to power nearly all of its buildings and facilities. It also plans to convert its entire bus fleet to zero-emissions technology. In addition to reducing emissions, the county is preparing for climate change adaptation measures involving wastewater, transportation and infrastructure, emergency management, public health, water supply and salmon.

Novozymes Uses Sustainable Development Goals as a Catalyst for Growth