On October 29, 21 young people suing the federal government for violating their constitutional right to a safe climate will finally have their day in court.

The date was decided Thursday at a conference in Eugene, Ore., between attorneys for both sides and Magistrate Judge Thomas M. Coffin. The case will be heard by United States District Court Judge Ann Aiken. 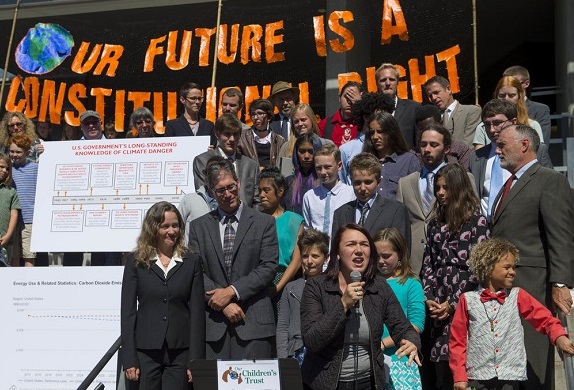 The case, Juliana v. United States, was originally filed in August 2015 by young plaintiffs from across the country and became the first in which a U.S. court has recognized the constitutional right to a safe climate. Aiken became the judge to do that when she initially sent the case to trial in November 2016. She recognized “the right to a climate system capable of sustaining human life.”

The young people are asking the court to order the federal government to make and stick to a science-based plan to stabilize and protect the climate for future generations.

“In the coming months there will be depositions of the parties, defendants’ disclosure of their experts, and expert depositions in late summer,” said Julia Olson, lead attorney for Our Children’s Trust and co-counsel for the youth plaintiffs. “We will build a full factual record for trial so that the Court can make the best informed decision in this crucial constitutional case.”

The case was initially filed against the Obama administration and was later altered to make President Donald Trump a defendant. In the days before Obama left office, the Justice Department response to the case confirmed many of the young plaintiff’s claims, including that monthly global average concentrations of CO2 have reached the dangerous threshold of 400 parts per million. In allegations regarding sea level rise, they admitted levels are slightly greater than what the plaintiffs claimed.

The federal government has tried repeatedly to have the case dismissed, including the most recent, a writ of mandamus request that was denied by the Ninth Circuit Court of Appeals.

When the Justice Department attorneys argued that the October trial date was too soon, that they needed more time to find expert witnesses, Coffin replied: “Where am I missing something? Given your admissions in this case, what is it about the science that you intend to contest with your rebuttal witnesses?”

Supported by Our Children’s Trust and Earth Guardians, the case is one of several climate-related legal actions brought by young people in several states and countries.