Renewable Energy has More Economic Benefits than You Know

Renewable energy is already cheaper than other energy options in most of the world, and it comes with more economic and societal benefits as well.

The first point is that there are a huge number of people employed in renewable energy jobs globally. There are almost 10 million of them around the world. Slightly over 3 million are employed in solar power. Large hydropower employs about 1.5 million people, and 1.2 million are in wind power employment. Advanced energy — which includes solar, wind, energy efficiency, energy storage and EVs — contributed $1.4 trillion to the global economy in 2016. (The US portion of this amount was $200 billion.) 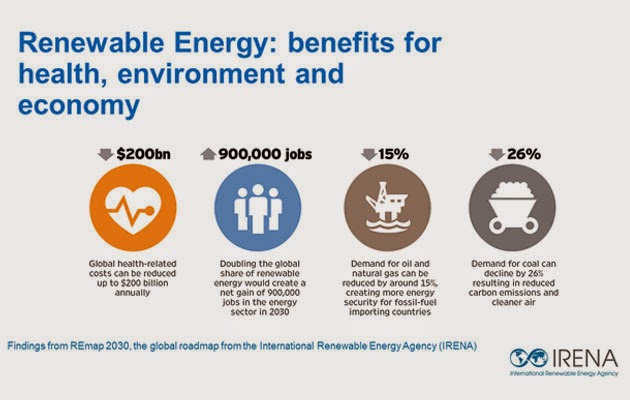 Over 260,000 Americans are employed by the solar power industry, and that total blows away the number of coal jobs — it’s well over three times more! Imagine if strong solar power industries were stimulated in West Virginia and Ohio. Easily beating coal again is the wind power industry, with over 100,000 jobs. Also, NREL published an article in 2017 stating that wind power technician was the fastest growing job in the country.

Another benefit is that wind turbines can be installed in rural areas at existing farms to provide much-needed income to local people. Here’s another fascinating example: “The report looked at the 23 largest wind farms in Illinois, finding that they will add almost $6 billion to local economies over their lifetimes and have resulted in the creation of more than 19,000 jobs during the construction periods. The projects will also support 814 permanent jobs in the state.”

Another economic benefit is that renewable energy is scalable in areas where there is very little or no electricity. For example, there are over one billion people who don’t have access to electricity. Getting home solar power systems gives them access to something that can change their lives for the better. “Even in the poorest countries, solar’s flexibility is making it desirable. In Bangladesh, more than 3.5m solar home systems have been installed in rural villages.”

How do you begin to quantify the value of giving electricity access to millions of people who did not have it? To put it simply, this benefit must be massive. Not having access to electricity puts many Africans in the position of having to buy kerosene, the economic effects of which can be far-reaching. “When added to cell phone charging, fuels for lighting and cooking, energy can consume up to 50% of household incomes in sub-Saharan Africa. As long as families are dependent on non-renewable energy sources, they cannot lift themselves out of poverty.” (Kerosene usage also results in a huge number of severe or even deadly burns every year in Africa.)

Adding new, more efficient energy technology can reduce waste in current systems. “India has seen other benefits to renewable energy, too, Logan says. Right now, the country loses about 30 percent of the energy it generates, because of transmission line losses. By having decentralized solar power and wind, they’ve cut these losses and seen big savings in energy and money.”

Continuing to use fossil fuels will only worsen climate change impacts and their costs. Renewable energy is clearly the solution to many global problems. How could anyone argue against potentially raising millions of people out of energy and/or financial poverty with a clean, inexhaustible form of electricity?