Stockholm’s clean energy and sustainability measures have been deployed to create two of the city’s most remarkable eco-districts.

Stockholm Royal Seaport is known in the city as a “second-generation sustainable city district.” The 650-acre area was the focus of a comprehensive 20-year sustainability program for the area created by the city in 2010. Now it is internationally regarded as a model urban development. 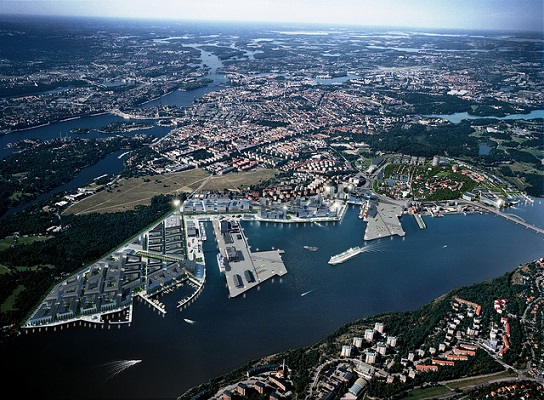 As early as 2020, it is designed to produce no more than 1.5 tonnes of CO2 per person, a level that climate scientists have calculated might be compatible with holding global warming to 2°C. Ultimately, it is supposed to produce more energy than it consumes.

The Stockholm Royal Seaport is the successor to Hammarby Sjöstad, Stockholm’s first eco-district, and has many of the same environmental features. Hammarby Sjöstad’s 1990s masterplan called for the construction of 11,000 “environmentally-friendly” residential apartments, using environmentally sound materials, new public transit, and plenty of green space on a polluted ex-industrial site.

Under the supervision of the City Development Administration and the City Planning Administration, life-cycle cost analyses were used to guide planning and investment decisions. making it easier to justify higher first-cost investments in energy and resource efficiency.

To “close the energy loop,” heat and biogas are recovered from the district’s sewage, and residual sludge is used as fertilizer in the district’s green zone. Buildings in the district must meet high energy-efficiency standards and many of the apartment buildings sport solar panels or building-integrated photovoltaics.

The Seaport project is being implemented in a coordinated and cooperative way involving people from many different sectors of city government. Within the project’s overall administrative structure, a consultative process was used that involved all the key stakeholders—developers, all city departments, technology providers, and many other groups.

Stockholm’s example makes clear that a rapid clean energy transition with a chance of being accomplished in time to mitigate climate change must be based on several key factors. These include painstakingly thorough analytical work, comprehensive planning, sound public policies, adequate financing, and management controls tied to specific deadlines and deliverables.

Government unquestionably must be actively engaged in all these endeavors. Stockholm planners took note of market forces and helped aligned market incentives to support plan goals. No one expected the market to deliver a rapid energy transition on its own. Stockholm had to engineer market incentives so that market forces supported rather than thwarted the climate action plan.

The Top 10 Sustainable Business Stories of 2017