Read the entire article and view the video at Quartz.

We produce 40 trillion kg of carbon dioxide each year, and we’re on track to cross a crucial emissions threshold that will cause global temperature to pass the dangerous 2°C limit set by the Paris climate agreement. Climate scientists are talking about a technology that could pull us back from the brink. It’s called direct-air capture, and it consists of machines that work like a tree does, sucking carbon dioxide (CO2) out from the air. 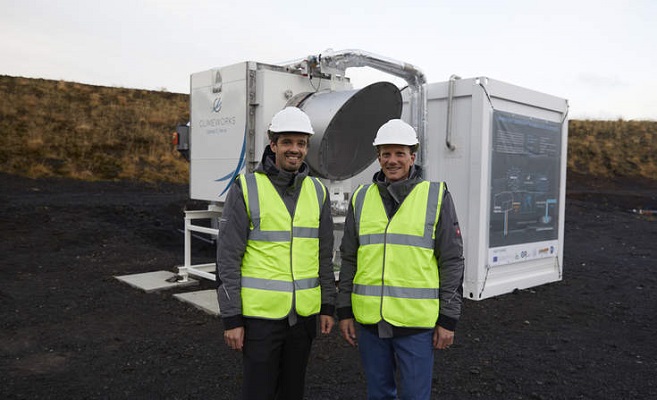 To date, all estimates suggest direct air capture would be exorbitantly expensive to deploy. For the past decade, a group of entrepreneurs – partly funded by billionaires like Bill Gates of Microsoft, Edgar Bronfman Jr. of Warner Music, and the late Gary Comer of Land’s End – have been working to prove those estimates wrong. Three companies – Switzerland’s Climeworks, Canada’s Carbon Engineering, and the US’s Global Thermostat – are building machines that, at reasonable costs, can capture CO2 directly from the air.

Over the past year, I’ve been tracking the broader field of carbon capture and storage, which aims to capture emissions from sources such as power plants and chemical factories. Experts in the field look at these direct-air-capture entrepreneurs as the rebellious kids in the class. Instead of going after the low-hanging fruit, one expert told me, these companies are taking moonshots.

Climeworks just proved the cynics wrong. On Oct. 11, at a geothermal power plant in Iceland, the startup inaugurated the first system that does direct air capture and verifiably achieves negative carbon emissions. Although it’s still at pilot scale – capturing only 50 metric tons of CO2 from the air each year (about the same emitted by a single US household or 10 Indian households), it’s the first system to convert the emissions into stone, thus ensuring they don’t escape back into the atmosphere for the next millions of years.

Academics used to think that direct air capture would be too expensive for any practical purposes. They still tend to think that for carbon capture and storage more broadly. But what Climeworks and its competitors are showing is that, if direct air capture can be made cheap enough for there to be commercial interest, then the economics of carbon capture at the source of emissions will likely work, too. And if nothing else, the existence of direct air capture gives humanity a high-premium insurance policy against what would surely be a much more expensive disaster.