Soil locks away carbon just as the oceans do. But that lock is getting picked as the atmosphere warms and development accelerates. Long before most people ever heard of climate change, scientists divided a patch of Harvard University-owned forest in central Massachusetts into 18 identical 6-meter by 6-meter squares. A canopy of red maple and black oak trees hangs there, looming above the same stony soil tilled by colonial farmers. Rich in organic material, it was exactly what the researchers were looking for. 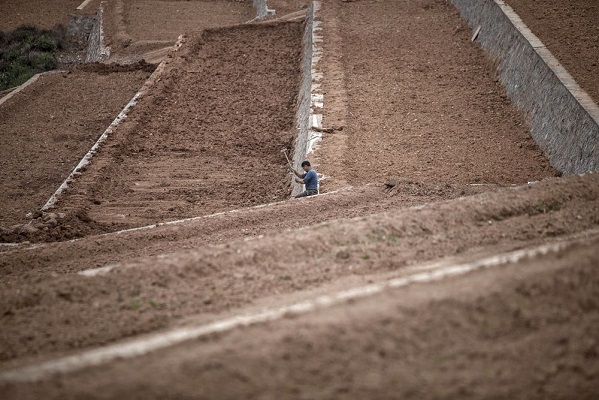 They broke the land up into six blocks of three squares each. In every block, one square was left alone, one was threaded with heating cables that elevated its temperature 9 degrees Fahrenheit (5 degrees Celsius) above the surrounding area. The third square was threaded with cables but never turned on, as a control.

That was 26 years ago. The purpose was to measure how carbon dioxide may escape from the earth as the atmosphere warms. What they found,published in the journal Science, may mean the accelerating catastrophe of global warming has been fueled in part by warm dirt. As the Earth heats up, microbes in the soil accelerate the breakdown of organic materials and move on to others that may have once been ignored, each time releasing carbon dioxide into the atmosphere.

Extrapolating from their forest study, the researchers estimate that over this century the warming induced from global soil loss, at the rate they monitored, will be “equivalent to the past two decades of carbon emissions from fossil fuel burning and is comparable in magnitude to the cumulative carbon losses to the atmosphere due to human-driven land use change during the past two centuries.”

The good news, however, is that the research community is now fully on the case. Over the past week, at least four high-profile papers largely funded by the U.S. government have contributed new evidence, observations, and insight into the role of soil and forests in the global carbon cycle—the flow of material in and out of land, air, life, and sea that’s currently broken and getting worse.

From a technical perspective, what they’re talking about here is plain old dirt. Ground. Loam. Land. Trees and leaves. From a practical perspective, it’s something different entirely. Soil is also cotton, corn, soybean, wheat, oranges, cattle, and the rest of humanity’s food and fiber. When it’s healthy, it grows most everything we need. It absorbs and retains moisture that might otherwise flood valleys where people live. It also absorbs and retains carbon that might otherwise be heating up the atmosphere.

The atmosphere gets all the attention in climate change, mostly because that’s where the warming happens. Even the oceans draw more concern than soil, especially when their warming temperatures help fuel massive storms and floods that kill humans and destroy communities. The seas hold 60 times more carbon than the atmosphere and absorb more than 90 percent of the heat that industrial pollution generates.

The soil, meanwhile, has been mostly ignored until lately. It’s both hugely influential on global warming and something humanity has a good deal of control over. The top 3 meters or so of earth store more carbon than the entire atmosphere and all plants combined. Taking care of the planet’s soil is “critical for stabilizing atmospheric CO2 concentrations,” according to a synthesis by Stanford University’s Robert Jackson and five colleagues, published in Annual Review of Ecology, Evolution & Systematics.