Warning that climate change amounts to the “mother of all risks,” three of the world’s biggest insurance companies this week are demanding that G20 countries stop bankrolling the fossil fuels industry. 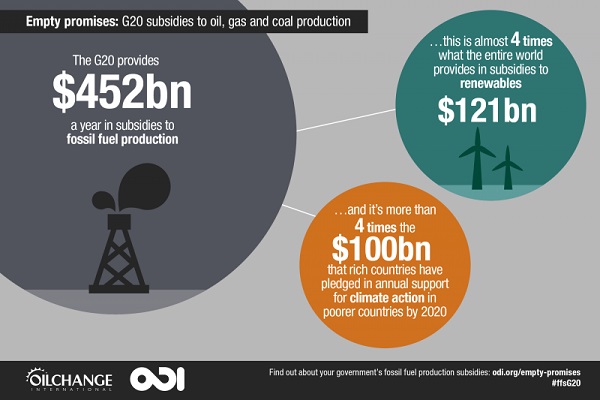 Multi-national insurance giants Aviva, Aegon, and Amlin, which together manage $1.2 trillion in assets, released a statement this week calling on the leaders of the world’s biggest economies to commit to ending coal, oil, and gas subsidies within four years.

“Climate change in particular represents the mother of all risks – to business and to society as a whole. And that risk is magnified by the way in which fossil fuel subsidies distort the energy market,” said Aviva CEO Mark Wilson. “These subsidies are simply unsustainable.”

According to a recent report by the International Monetary Fund (IMF), fossil fuel companies receive an estimated $5.3 trillion a year in global subsidies—a figure that included, as the IMF put it, the “real costs” associated with damage to the environment and human health that are foisted on populations but not paid by polluters.

The declaration was issued as leaders prepare to convene for the 11th summit of the G20 world economies, which is being held in Hangzhou, China in September under the theme, “Toward an Innovative, Invigorated, Interconnected, and Inclusive World Economy.”

“We’re calling on governments to kick away these carbon crutches, reveal the true impact to society of fossil fuels and take into account the price we will pay in the future for relying on them,” Wilson added. Indeed, insurance companies are increasingly shouldering many of the costs associated with a warming planet, whether it be from extreme weather damage or reimbursing farmers for lost crops.

In the first half of 2016 alone, natural catastrophes have caused $70 billion in losses, of which $27 billion was insured, according to an assessment by insurance and reinsurance company Munich RE—with events of particular note being climate-related “storms in the U.S. and Europe, massive forest fires in Canada, and the complete absence of typhoons in the northwestern Pacific.”