Read the entire article at The San Francisco Chronicle.

An ambitious design competition that seeks to make the Bay Area a model for how to prepare for sea-level rise kicks off this week. The competition, dubbed “Resilient by Design,” will select 10 interdisciplinary teams to tackle 10 sites around the bay, with at least one in each county. Each team will focus on a single site and prepare a design response that is intended to be not just visually cool, but scientifically and economically feasible. 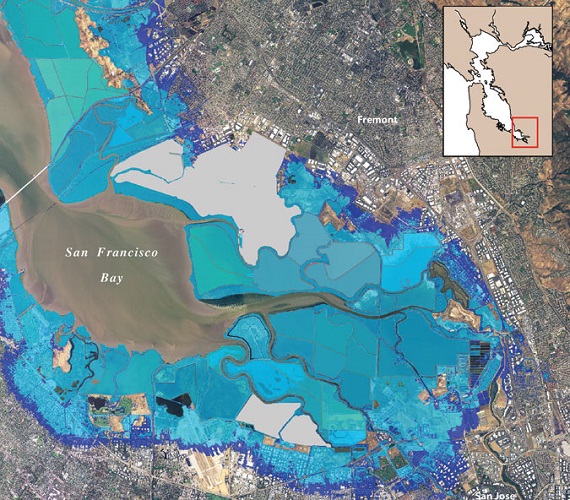 “If we can figure out how to do this, and make changes on the ground or along the shore as well as come up with ideas, we can really be a model” for other metropolitan areas, said Amanda Brown-Stevens, managing director of the design competition, which is scheduled to conclude next May.

“We want to emphasize the idea that everyone is involved,” said Brown-Stevens, a former deputy director of the Greenbelt Alliance who also has worked on local political campaigns. “There needs to be significant community buy-in for this effort to be successful.”

The 10 locations are to be selected in December, with an emphasis on different scales and challenges as well as making sure that each Bay Area county is included. Each team will be assigned a spot, and design solutions will be presented in May. The idea is that the design proposals will include specific restoration efforts or infrastructure upgrades that could then be implemented as funding becomes available.

The most recent government-sponsored projections for the Bay Area were done in 2012 and suggest that daily tides within the Golden Gate could climb between 18 and 66 inches by 2100. That’s why Resilient by Design has the potential to reshape the region, advocates say. It allows planners and politicians to get ahead of events and begin to craft adaptation strategies that don’t simply involve building ever-taller walls along the shore.

The Long and Winding Road to Sustainable Tourism