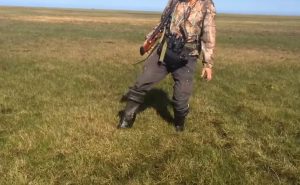 Measurements taken by researchers on expeditions to the island found that after removing grass and soil from the ‘bubbling’ ground, the carbon dioxide (CO2) concentration released was 20 times above the norm, while the methane (CH4)  level was 200 times higher.

One account said: “As we took off a layer of grass and soil, a fountain of gas erupted.”

Read the full article and watch the video at The Siberian Times.