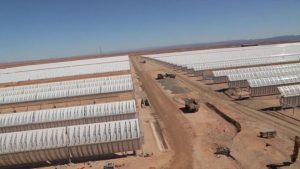 “A giant plant using energy from the Sun to power a Moroccan city at night will open next month. The solar thermal plant at Ouarzazate will harness the Sun’s warmth to melt salt, which will hold its heat to power a steam turbine in the evening. The first phase will generate for three hours after dark; the last stage aims to supply power 20 hours a day. It is part of Morocco’s pledge to get 42% of its electricity generation from renewables by 2020. The UN has praised Morocco for the level of its ambition. The UK, a much richer country, is aiming for 30% by the same date. The Saudi-built Ouarzazate solar thermal plant will be one of the world’s biggest when it is complete. The mirrors will cover the same area as the country’s capital, Rabat.

Paddy Padmanathan of Saudi-owned ACWA Power, which is running the thermal project, said: “Whether you are an engineer or not, any passer-by is simply stunned by it. “You have 35 soccer fields of huge parabolic mirrors pointed to the sky which are moveable so they will track the Sun throughout the day.” The developers say phase one of the futuristic complex will bring energy to a million people. The complex stands on the edge of a gritty, flat, rust-red desert, with the snow-clad Atlas mountains towering to the North. It is part of a vision from Morocco’s King Mohammed VI to turn his country into a renewable energy powerhouse. The country has been 98% dependent on imported fossil fuels, but the king was persuaded of the vast capacity of Atlantic wind, mountain hydro power and scorching Saharan sun. The king’s plans are being enacted by environment minister Hakima el Haite. She told me: “We are convinced that climate change is an opportunity for our country.” As part of its national commitment to the Paris climate conference, Morocco has pledged to decrease CO2 emissions 32% below business-as-usual by 2030, conditional on aid to reach the renewables target.”