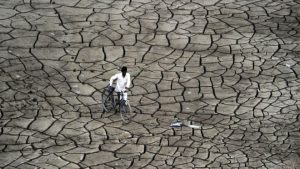 “A UN review of national plans to cut carbon says they are well short of the levels needed to keep the rise in global temperatures under 2C. The report finds that by 2030 the amount of CO2 entering the atmosphere will be some 25% above that mark. The analysis takes into account the pledges that countries have made under the Paris climate agreement. Many scientists say that technology to remove carbon from the air will now be needed to meet the Paris targets. The UN Emissions Gap Report, prepared by an international team of scientists, finds that by 2030, global emissions are expected to reach 54 to 56 gigatonnes of CO2. The authors say this is far above the 42 gigatonnes needed to have a good chance of staying below 2 degrees by the end of the century, and a long way from the 39 gigatonnes needed to keep to 1.5 degrees as was promised in Paris last December. A gigatonne is roughly the equivalent of the annual emissions produced by all forms of transport in the European Union.

While the report notes that the growth of emissions from fossil fuel use and industry is now slowing, this scale of carbon would put the world on track for a rise in temperatures by the end of this century of between 2.9 and 3.4 degrees C. “We are moving in the right direction: the Paris Agreement will slow climate change, as will the recent Kigali Amendment to reduce HFCs,” said Erik Solheim, head of UN Environment. “They both show strong commitment, but it’s still not good enough if we are to stand a chance of avoiding serious climate change.” The report suggests that there are some areas where progress can be made. The assessment of the plans of the richer G20 countries indicates that some are in line to deliver greater reductions than planned.”