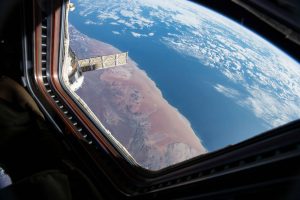 “I used to be an astronaut, a spacewalker on the International Space Station. Naturally, most of my fifteen-year crew career was spent on the ground, working with engineers to get the Station built and fully crewed for scientific research, but the day-in, day-out flow of this ground work was punctuated by the occasional illuminating, even eye-shattering experience, when I was launched into orbit and saw Earth through my spacesuit visor.

The Station goes around the world in an hour and a half, which means it flies through fifty minutes of day, followed by fifty minutes of night, endlessly repeating. This means that during a seven-hour spacewalk, you may see four sunrises and sunsets. I remember holding onto a handrail on the outside of the Station, which was flying silently up the Atlantic, from south to north, and as we moved toward Europe I could see the terminator—the line between night and day—rolling up over the horizon ahead of us. The white sun sank quickly behind us in a showy flurry of orange, pink, and red horizon bands, and then we were suddenly in twilight, floating into the dark half of the world. The terminator flicked over us, and, in the deeper darkness ahead and below us, I could see a huge lit-up city, glued to the curved Earth, sliding up over the rim of the world to meet me. I could see the structure of the city, with its glowing heart, its network of roads and its halo of suburban lights fading into the dark countryside. The city was Cairo, looking beautiful and radiant. Down there, millions of people were trying to make a living, find or keep a job, provide for themselves and their families, and worrying about the future. I could cover all of them with one outstretched hand. Cairo slid under and then behind me, and more cities rolled into view over the horizon, all tacked to the outside curve of the planet surface, and all seemingly moving toward us, rather than us toward them.”