Read the full article on http://civileats.com/ 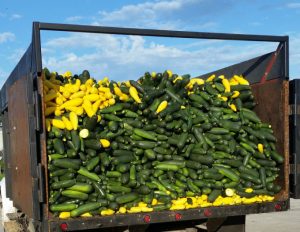 “Farm-to-food-bank programs are now saving 300 million pounds of ugly and surplus produce a year in more than 20 states.

Every fall, farmers in Washington throw away a sizable portion of the apples they grow. In 2015, thanks to the West Coast port slowdown and a lack of refrigeration, farmers in the state dumped an estimated $100 million worth of the fruit (or 143,000 bushels) in fields where they were left to rot, causing the nearby town to smell like rancid fruit for days. David Bobanick, Executive Director of the Washington-based hunger organizationRotary First Harvest, finds the apple dumps alarming. And although this year was an extreme example, it’s not unusual for fresh produce to go to waste due to a lack of infrastructure. In fact, approximately 23 percent of all fruits and vegetables are wasted before they even reach grocery stores. Meanwhile, 46.5 million Americans struggle to get enough healthy food.

This produce gap is one Rotary First Harvest hopes to help bridge with a program calledFarm to Food Pantry. With help from the Washington State Department of Agriculture, the program buys fruits and vegetables directly from local farmers—including produce that isn’t typically available through established donation streams. Meanwhile, farmers were able to provide produce without undue financial risk because the program pays them in advance. “Hunger relief systems are not usually set up to handle produce. We are working on that with our program” said Bobanick.”

Read the full article on http://civileats.com/