Read the full article on http://thinkprogress.org 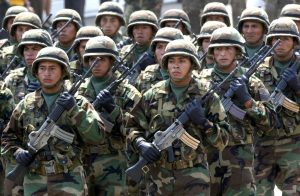 “When one of the strongest El Niños ever recorded hit the South American country of Peru in 1982, the abnormal warming it brought to the Pacific Ocean was a catastrophic blow to the already economically fragile nation. The fishing industry quickly suffered massive losses as the anchovy harvest collapsed and the sardines suddenly migrated south into Chilean waters.

Heavy rains and flooding crippled agriculture and infrastructure in the north. Crops in the south and the highland were battered, too, with a drought that for some areas seemed to be the continuation of a short but intense dry spell that had ended just two years before. By 1983 the country was an economic and violent mess. It had lost more than 10 percent of its gross domestic product in a matter of months. Inflation was rampant. Poverty was widespread but particularly overwhelming for the indigenous population, and the Shining Path, a terrorist insurgency that went on to kill more than 70,000 until its demise in the mid-1990s, was ramping up deadly coordinated attacks.”

Read the full article on http://thinkprogress.org

We Have Used Up This Year’s Supply Of Natural Resources