The good news is that the time frame for this special day has slowed its march back through the calendar. It is still coming earlier each year, but the number of days earlier has slowed since 2011, even while global economies continue to grow. 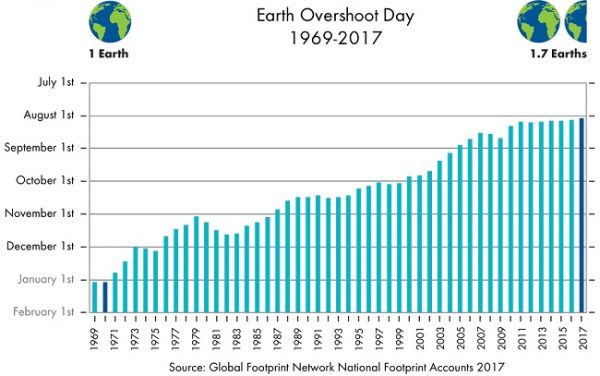 The bad news is that we’re still using 1.7 times more food, timber, water, land and other ecological services than this Spaceship Earth can support.

“The long-term concern regarding Earth Overshoot Day is that every year we overshoot the bio-capacity of the planet is a year in which we reduce the ability, robustness and resilience of the Earth to support our species. The earlier Earth Overshoot Day arrives, the more risk we put on our long-term survival.” – Tim Rumage, planetary ethicist and Chief Science Officer on This Spaceship Earth

You can read Tim’s entire blog post about Earth Overshoot Day at http://planetaryethicist.com/2017/08/earth-overshoot-day-is-here-again/

It is our goal to recruit one billion crew members. That is, people thinking, acting and living as active crew members… aware of their use of the limited resources we have on Spaceship Earth. If we can do that, humanity will save itself from itself. Market demands will skew toward renewable resources. Political leaders will listen to the will of the people.

Become a crew member by adopting one of the behaviors we have listed here: https://thisspaceshipearth.org/get-involved/acting-as-crew/ By taking that one step, you will embark on a journey toward a future when Earth Overshoot Day is no longer an annual event.

If you’re already a crew member, we’d love to hear about your crew activities. Use your smartphone to shoot a short video like this one Crew Member Peg and send it to bob@thisspaceshipearth.org