“Those who fail to see that population growth and climate change are two sides of the same coin are either ignorant or hiding from the truth. These two huge environmental problems are inseparable and to discuss one while ignoring the other is irrational.” – James Lovelock, scientist and environmentalist

This is a taboo subject, so it’s one that is often ignored. It’s time we talked seriously about it. The reality is that all apex species eventually go extinct… and it’s usually due to byproducts of their success: overpopulation and resource depletion.1

Because individuals in the developed world have the greatest impact per person, people choosing to have smaller families in the richest parts of the world will have the greatest positive effect. The personal decision of whether to have children or not is influenced by religion, sense of self, upbringing and long-held beliefs. Those beliefs are of questionable relevance in the 21st century. These legacy viewpoints may be why population has not become the primary topic of discussion relative to climate change. Climate scientists and activists may view the world through the lens of those beliefs.

The decision to have a child is the single most environmentally impactful decision any of us can make. In almost every article or book written about the need to stop burning fossil fuels, there is a chart showing the dramatic increase in CO2 emissions since the beginning of the Industrial Revolution. Here is one that tracks population growth alongside it. 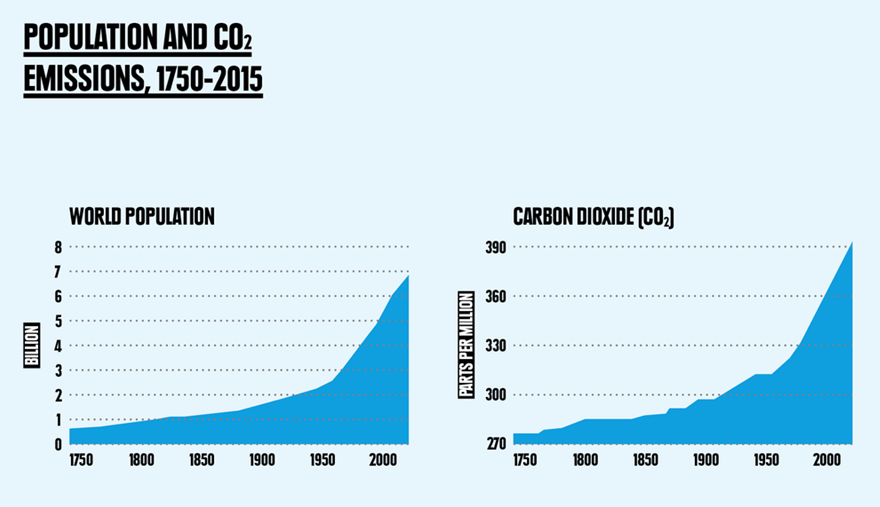 We are currently at 7.8 billion people on Spaceship Earth. Worldwide population is expected to surpass nine billion by 2050, and reach between 10 and 11 billion by 2100.2 It is clear that to continue our current per capita level of fossil fuel use, while adding another three billion people, is the road to catastrophe.

“In discussions about climate change, we tend to focus on the carbon emissions of an individual over his or her lifetime. Those are important issues and it’s essential that they should be considered, but an added challenge facing us is continuing population growth and increasing global consumption of resources… Future growth amplifies the consequences of people’s reproductive choices today, the same way that compound interest amplifies a bank balance.” – Paul Murtaugh, Emeritus Professor, Oregon State University

Organized religions encourage large families to create increasing numbers of followers. This is to ensure the survival of the religion’s dogma and to support its clergy. No major traditional religion promotes birth control. That is short-sighted and it lacks compassion. With more mouths to feed, large families often fall into poverty.

In the US, legacy thinking still assumes that couples should have children. Governments and corporations need population growth to help sustain GDP growth. Religions need to keep generating demand for their services. Most adults have one or more siblings, which sets expectations for their own procreation.

In the 1980s there was a social phenomenon called DINK (Double Income, No Kids). Husbands and wives worked and both generated income. By deciding not to have children, they avoided the added expense, and neither partner had to take time away from building their careers. These couples had to swim upstream against the perceptions of societal norms. Couples with children often accused the DINK couples of being selfish.

“Everybody with a womb doesn’t have to have a child, any more than everybody with vocal cords has to be an opera singer.” – Gloria Steinem, feminist, journalist and activist

Today, with the growing knowledge and acceptance of climate change, many couples are choosing to have only one child or none at all. 38% of 18 to 29-year-old Americans believe that a couple should consider the risks of climate change before deciding to have kids. “I can’t have a child unless I am seriously, seriously convinced that we are on a different path.” Another reason often cited for putting off or foregoing having children is the economic cost.3

Drawdown is a book that describes the 100 most substantive solutions to global warming. For each solution, the book describes its history, the carbon impact it provides, the relative costs and savings, the path to adoption, and how it works. The goal of the Drawdown research is to determine if we can reverse the buildup of atmospheric carbon within thirty years. All solutions modeled are already in place, well understood, and have been analyzed based on peer-reviewed science.

The long term approach to population as it relates to climate change is to set goals for the rest of this century. Today we are just short of eight billion people on Earth. Rather than growing population to 10 or 11 billion by 2100, we can take action to ensure less than 2.1 children per woman (the replacement rate), with the goal of six billion or fewer people by 2100. No one has to die prematurely, nor should they have to fight for limited resources with billions of new passengers on Spaceship Earth. If we can realize a goal of six billion inhabitants by 2100 through societal transformation and family planning, we can have a good chance at a vibrant civilization in 2100.

If we don’t get a firm hold on population growth, many will die prematurely. To learn more about how family planning is crucial to the continued success of the human species, see “Moving to a Finite Earth Economy”.

Growth Economies and Our Climate Crisis