Our Oceans, Our Future

The ocean has a draw to it.  We go there to live, to work, to relax, to escape, and to find ourselves. It is a mystery, a provider, a taker, and a wonder. It is a source of life. 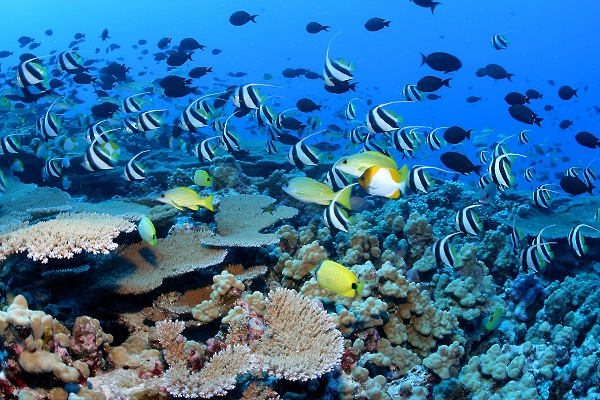 In an effort to improve our relationship with the ocean, the theme of this year’s World Ocean Day1 is “Our Oceans, Our Future” with a focus on encouraging solutions to plastic pollution and preventing marine litter. The objective being a healthier ocean, and a healthier future for the planet and all who reside here.

The oceans cover 71% of the surface of the Earth. They generate much of the oxygen that we breathe. They absorb a majority of the carbon dioxide that we emit. They provide food and regulate our climate. They are important economically for a number of reasons including tourism and the busy international trade routes that they provide.

Unfortunately, we are stressing our oceans with practices including destructive overfishing, marine pollution, habitat destruction, and ocean acidification. All of these are taking a substantial toll on our oceans.

We have a disconnected relationship with our oceans. We have more detailed maps of the moon, Mars and Venus than we do of the bottom of the sea2. We can’t even agree on how many oceans there are. Technically we have no international political agreement on the number of oceans – is it four or five? The Arctic, the Pacific, the Atlantic and the Indian Oceans make up the 4-ocean worldview, while a Southern or Antarctic Ocean is added to complete the 5-ocean scenario. These divisions are human made political separations regarding rights and management. In planetary reality, there is only one ocean as they are all connected to each other.

Our biggest disconnect in how we relate to the ocean is our seeing/thinking/using it as a resource and a waste disposal unit simultaneously. 10% of the world’s population depends upon fisheries for its livelihood. Fish provide a major source of protein for many of the people and animals on the planet. Globally, 31.4% of the world’s fish stocks are overfished, and 58.1% are fully fished (with zero opportunity for expansion).

As to the waste issue, a recent study found that “fish populations throughout the world’s oceans are contaminated with industrial and agricultural pollutants, collectively known as persistent organic pollutants (POPs)3.”  Fish are also contaminated with heavy metals, PCBs (polychlorinated biphenyls) and plastic4. So while fish is a high quality source of protein, it also has a variable risk factor due to a wide range of contaminants that can be found in different species and in different individual fish.

How much of an issue is plastic pollution? Humanity dumps eight million metric tons of plastic into the ocean each year5. That is 21,918 metric tons per day, or 250 kilograms (551 pounds) per second.

Our plastic problems don’t end there. Plastic doesn’t biodegrade. It can physically degrade… breaking into smaller and smaller pieces, but the plastic is still there. And as it physically breaks down, it enters into the food web of marine animals. It is consumed by all types of sea creatures from zooplankton to blue whales. Plastics in the ocean also accumulate other man-made chemicals that are in the marine environment; some of which are toxic and others are endocrine (hormone) disruptors.

So the next time you go to the beach or out on the water, act as crew. Don’t take plastic items with you. If you find plastic on the beach or floating by, collect it and dispose of it properly. Our oceans are a major portion of our biosphere, and they affects all kinds of life both in the water and on the land. Our oceans are our future.