Climate Change is Physics, Not Politics

Several weeks ago a very special event occurred. The Wise Elders of the Republican Party came out for a carbon tax. The depth and seniority of the initial group is truly amazing: 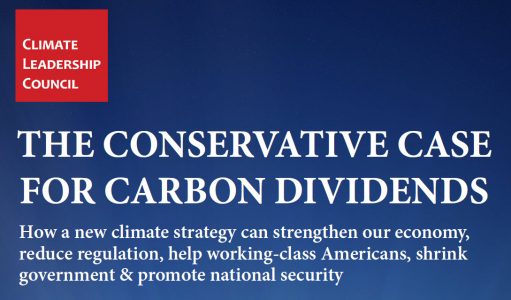 These men are not environmental activists, or progressive Democrats or second tier former government officials. They are a group of the most distinguished members of the executive branch of government to have served in the last three Republican administrations.

Their stature and the pure, effective simplicity of the proposal can mean the end of the politicization of Climate Change. It is not an issue of party. It is not an issue of politics. It is the simple use of market economics to solve the urgent necessity of lowering fossil fuel emissions ASAP. It is a straightforward proposal that could result in an estimated 25-30% reduction of carbon emissions in the U.S. by 2025.

The lead spokesman for the group is James Baker, probably the most high profile and still active Republican member of the group. Baker stated that the initial tax rate would be $40 a ton when fossil fuels enter the economy, be it from a domestic source or at a port. The full revenue estimate for the $40 a ton is $200 to 300 billion per year. Obviously such a tax would not only raise revenue, but also the cost of living. So the proposal is to take the hundreds of billions of dollars of revenue and provide a “carbon dividend” to the American public. The estimate of the annual dividend is approximately $2,000 for a family of four.

In addition, any country that doesn’t have a carbon tax and wants to import products into the U.S., will need to pay a tariff on those goods. That means that any country that wants to import into the U.S. will have a choice of two options. First, they can impose a carbon tax in their own country, generating taxes for their own country and increasing the price of the products they wish to import. Or, they can accept the “carbon tariff” and the U.S. generates even greater carbon tax revenues to be distributed to Americans.

The proposal is suggested as an alternative to the regulations put in place under the Obama administration. The proposal from the Wise Elders of the Republican Party is presented as a “free market” alternative to regulation. It is therefore something that Republicans, Libertarians, and small government anti-regulation politicians can all support. That includes most of the Republican Party, the party that is most identified with Climate Change denial.

In these highly politicized times, it often takes coalitions of odd bedfellows to create a break through. This is clearly one of those times. Anyone who understands that climate Change is an existential threat must support this proposal and applaud those that put it forward. This is a breakthrough opportunity.

There is precedence to a carbon tax that points to how effective it can be to lower carbon use. In 1964 the Surgeon General of the U.S. put out a report that for the first time connected smoking to lung cancer, heart disease and death. At that time 43% of all American adults smoked cigarettes. That report triggered some decline in smoking, but not much. We knew it was bad for us but we didn’t really stop. Today we know that putting CO2 into the atmosphere is bad for all living things, but we still do it.

The number of American adults who smoke is now 17%. In 1964, cigarettes averaged $.30 a pack in the U.S. Today the average price is $7.26 – with a range from $4.98 in Virginia to $13.50 in New York. This increase far outpaces inflation. The increases are mostly the result of ever increasing federal, state and local taxes. Tax a product, and then raise that tax, and the use of that product declines. Here is a short improvised video Cigarettes and Seatbelts  I did about this topic on the ThisSpaceshipEarth.Org YouTube channel.

So, it is time to embrace the free market proposal of the Wise Elders of the Republican Party and support it becoming a reality. The politics can end, and we can move forward on a brilliant idea that will allow us to tell our children and grandchildren that we actually did something for them.

Today’s Climate Change is all about People