What if Economic Growth is No Longer a Positive?

No economic growth is a bad thing. When economies and companies don’t grow, they stagnate and falter. Which means fewer jobs, lower wages, less money to invest, more business shut downs, and bankruptcies. In short, more misery for all. It’s all so obvious, right? It’s one of the precious few things we can all agree on in this fractious age.

But there are some new strains of thought that take a more nuanced and sophisticated view of growth. That say, yes, all other things being equal, economic growth is a positive thing. But all other things are not equal. There’s no such thing as a free lunch, and, for all its positives, economic growth has a dark side; its ecological impact. The impacts of our ever-growing economy have become so stark and so widespread that they are by any sane measure portents to catastrophe. Whether it’s the fact that Antarctic ice is now melting three times faster than we thought, or the unfolding “biological annihilation” that has already wiped out 50% of all animals and up to 75% of all insects, or the fact that, in spite of all this, we are pumping out CO2 at record levels, it takes willful ignorance or a blinding ideology to deny the severity of the crisis. 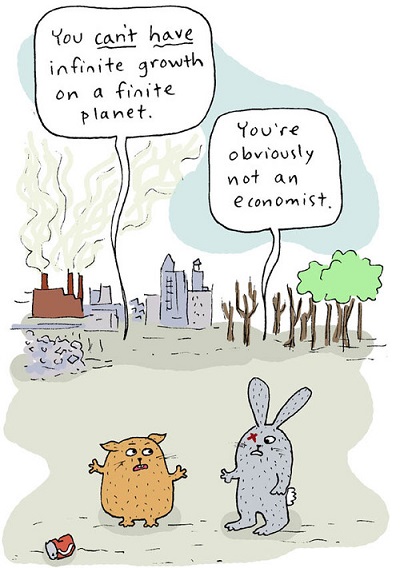 This creates a terrible paradox: Economic growth keeps economies stable today, but threatens not just future growth but medium-term social and civilizational cohesion, and ultimately the very capacity of this biosphere to sustain life. A paper published in the Proceedings of the National Academy of Sciences last year suggested that “the window for effective action is very short, probably two or three decades at most.” And that even this dire prediction is considered “conservative” by the authors, “given the increasing trajectories of the drivers of extinction.” In terms of practical politics, that means acting immediately, preferably yesterday.

Most politicians deal with this paradox by ignoring it. It’s by far the easiest option; one afforded every incentive and reward by this political economy and the beliefs that underpin it. This belief system has been dominant for a long time now. We are, as a society, deeply comfortable with it, which means many of its core assumptions are considered unassailable–too obvious to question. The most profound being this idea that growth is always good. Questioning this amounts to political suicide for any politician.

Or, at least, it used to. We are starting to see some movement in interesting corners of the global political landscape that suggest that some leaders are showing the sort of political courage needed to shift established norms. It may well be starting to become something of a bonafide political movement. It’s young and small, still, but so were all movements at one time.

A little thought experiment shows how growth can be a problem: Insert the word “a” before it. “A growth.” That feels very different from just “growth,” right? Growth is a big part of what we all understand happens in a healthy life. Children grow, knowledge grows, love grows. But “a growth” is what happens when life gets corrupted. “A growth” is when the growth is unchecked, and thus a symptom not of health but disease; when it takes on the character of an invader, attacking its host. The word for growth that gets out of control in this way, such that it becomes “a growth,” is, of course, cancer.

But wait, I hear you cry, technological progress will save us! We can just grow meat in test tubes rather than needing so much land and clean air space for cows and their methane-laden farts, or we can all switch to renewable energy, or recycle more and better, and then we can get back to the promise of infinite growth. Unfortunately, the evidence is clear that this is simply not possible. Yes, we can make dents in our impact with such measures, and we should with all possible speed, but the way the global economy is currently programmed means such things are important–but also entirely insufficient.

So, once we discard the vain hope of being able to grow the economy infinitely and indefinitely, what are we looking at? This is where the innovation and bravery come in. A new alliance was formed in 2017, called the Wellbeing Economy Alliance. What they are shooting for is one–or many different–economic model(s) that have, “the fundamental goal of achieving sustainable well-being with dignity and fairness for humans and the rest of Nature.” Which means they cannot just reach for socialism or any other historical model–socialism, like capitalism, relies on growth, as does communism. They have recognized that we can’t rely on past thinking; we must genuinely put our best brains forward and innovate.

We’re not talking about a bunch of random, dreamy utopians here, but real politicians who have won real elections and are exercising real power. So far, the roster of governments signing up to the Alliance includes Scotland, Costa Rica, Slovenia, and New Zealand. Other governments that are actively looking at the issue include Italy, and there are political parties emerging, like the Alternative Party in Denmark, which is also embracing the innovation challenge. These are not what are often referred to as Tier 1 countries in the international order, but neither are they so small they are irrelevant.

New Zealand is, perhaps, the most newly bold. Its prime minster has not only called growth-at-all-costs capitalism “a “blatant failure” but also has said her government would no longer accept GDP as the sole, supreme measure of progress. “The measures for us have to change,” she said in October last year. “We need to make sure we are looking at people’s ability to actually have a meaningful life, an enjoyable life, where their work is enough to survive and support their families.”

And this is where social and economic forces start to align in very interesting and potentially powerful ways. And open the door for seeing electoral strategies in an agenda based on innovations to take us beyond traditional growth-at-all-costs economics.