New NASA Administrator Jim Bridenstine faced tough opposition during his confirmation hearings after being nominated by President Trump to head the space agency. A lot of that had to do with previous statements he had made about climate change.

Read the entire article at the Orlando Sentinel.

Many opposed to his appointment feared he did not believe in climate change and global warming and voiced concerns over the future of the agency’s scientific missions. At an employee town hall at NASA headquarters on Thursday, Bridenstine spent several minutes addressing those concerns. 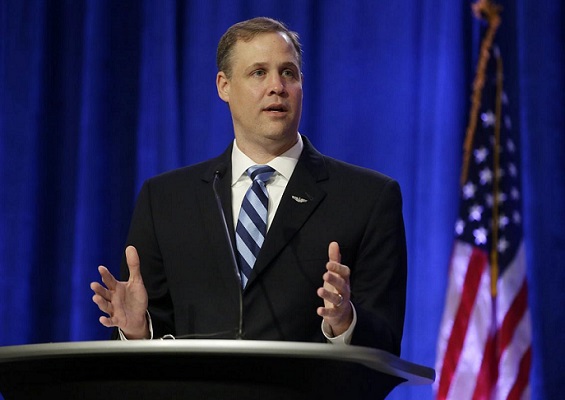 “As far my position on climate and how it’s evolved, I’ll be very open and I’ll share the story here,” he said. He described that in 2013, a massive tornado killed 24 people from Oklahoma, and as an elected member of Congress from that state, he began work on the Weather Research and Forecasting Innovation act, which was passed in 2017.

In his comments in 2013, he said he pulled information from NASA about global temperatures. “In debate, there was a moment where I said these words — I said ‘temperatures quit rising 10 years ago, but here’s what I know. My constituents this year will die in a tornado. Let’s allocate resources where we can save lives and property today.’”

In the town hall, he said that immediately after that year, temperatures began to spike, and although he also says it’s gone down a little in the last two years, he made this statement:

“I don’t deny the concensus that the climate is changing. In fact I fully believe and know that the climate is changing, and I also know that we human beings are contributing to it in a major way. Carbon dioxide is a greenhouse gas. We’re putting it into the atmosphere in volumes that we haven’t seen and that greenhouse gas is warming the planet. That is absolutely happening and we are responsible for it.”

He then went on to explain what he intends for the agency in the future. “NASA is the one agency on the face of the planet that has the most credibility to do the science necessary so that we can understand it better than ever before.”

He cited a study that ranked concerns for the next decade that tackled things like the water cycle, rising seas and how humans are changing the climate.

“We have guidance from an apolitical nonpartisan national academy for science telling us what is important for humanity, and we’re going to follow it and I intend to do that,” he said.