Ten CEOs of some of the world’s largest and most profitable companies (including Shell, Saudi Aramco, Statoil and BP) are moving quickly to embrace the low-carbon transition.

“Looking back over the past three years, I’m struck by just how far we’ve come with the OGCI, and how quickly we’ve come,” Bob Dudley, BP chief executive and current chair of the Oil and Gas Climate Initiative, told a room full of investors, fossil fuel industry executives, green NGOs and journalists late last week. 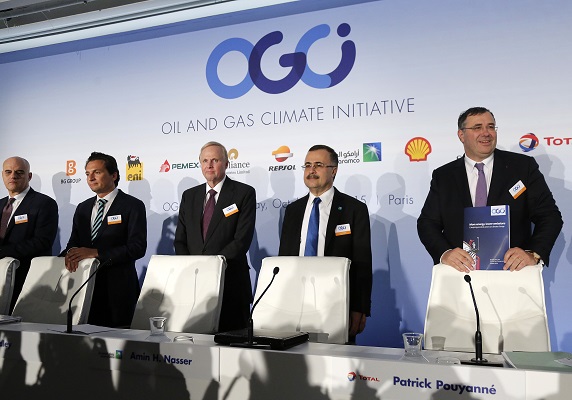 He was speaking at an event held in London to announce the first three projects to secure funding from the fossil fuel coalition’s $1 billion Climate Investments arm: one carbon capture and storage project; one low emission cement production project; and one high-efficiency vehicle engine technology project.

“Climate Investment’s goal is to reduce emissions by investing in technologies and solutions that are both cost-effective and can scale globally,” said Rangarajan, who only took up her position in June, having previously worked on renewables at both General Electric (GE) and Vestas. “The impact of these investments will not be felt until they get deployed globally, and that in infrastructure projects takes a long time. So we at Climate Investments, as in OGCI, feel an urgency.”

So while many deem the OCGI’s progress on low carbon investments and on developing CCUS in particular as too slow, the coalition is at least working behind the scenes to drum up backing beyond its 10 members, which will be crucial in making carbon capture a commercial reality on a wider basis. This also could add some substance to the CEOs’ repeated statements on the need to rid the world of coal-fired power, and also help make CCUS a going concern, despite the limited funding earmarked towards these purposes over the next decade by OGCI itself.

Furthermore, that the OGCI is working with outside organizations to address the industry’s methane problems, while also internally operating as a forum for its 10 members to discuss and collaborate on decarbonization, enhances the overall dialogue the sector desperately needs to be having. After all, even if its membership includes no U.S. companies, the OGCI is a hugely influential group of global corporations.