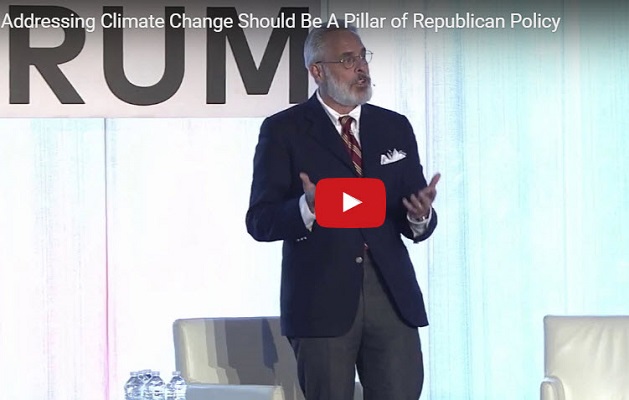 Mr. Taylor is the founder of the Niskanen Institute. He spent years of his career as a professional climate denier  – his senior role at libertarian think tank Cato Institute demanded it, and he was unconvinced that the risks of taking action outweighed the destruction that action might have on the world’s economy. But starting about seven years ago, Taylor began to question his own assumptions, and after studying the science  ( and in particular the academic economics )  more carefully, he had a complete change of heart. Taylor is now an advocate for addressing climate change.

Jerry Taylor: I used to be the number two person at the Cato Institute. When I was hired there in 1991, I was responsible for building our resistance to climate action. To give you an idea of what the mindset is of somebody in that world, we believe that extraordinary claims require extraordinary evidence. If you are going to tell me that business as usual and capitalism as we know it and our reliance upon fossil fuels, which help fuel the US and the global economy, is going to lead to some sort of Book of Revelations apocalyptic outcome unless we totally re-engineer society, people like me who like capitalism and like fossil fuels and like the industrial age are going to ask for a lot of evidence.

That was my task, and I was good at it, but I found that my position from 1991 to the present began to degrade completely… Believe it or not, libertarians and conservatives and Republicans were put on this earth with the perfect answer to climate change  –  harnessing markets and price signals via a carbon tax or a carbon tax-like mechanism to reduce greenhouse gas emissions. We’re perfectly placed to do that.

I call for a quick march away from fossil fuels to a low carbon energy future using government to get us there, using market mechanisms. Republicans have been in this place before. They’ve accepted these arguments before. They’ve even nominated candidates for president who’ve acknowledged these arguments, and not all that long ago, only nine years ago.