Read the entire article on Inside Climate News.

A federal judge has set a trial date for the landmark lawsuit brought by 21 children and young adults over the U.S. government’s alleged failure to rein in fossil fuel development and address climate change. The trial will start on Feb. 5, 2018, in federal district court in Eugene, Oregon. 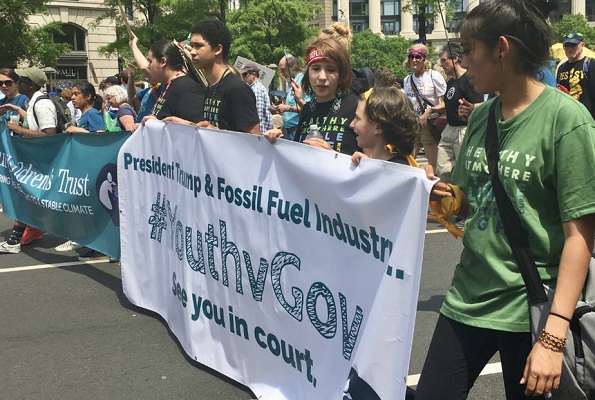 The judge also agreed to let the country’s biggest fossil fuel lobbies withdraw from the case, which may shield them from having to turn over documents.

Filed in 2015, the lawsuit, Juliana et al v. United States, seeks sweeping changes in federal climate change efforts and in government programs that subsidize or foster the development of fossil fuels. A decision on the lawsuit by Judge Aiken could come once the trial ends some time in the spring of 2018, though the case is expected to be appealed by both sides possibly to the Supreme Court, likely delaying the final outcome for years. Its advancement to trial means that decades of federal policy on fossil fuels and climate change (including information that had previously been unknown or hidden) could come under public scrutiny.

In November 2015, the American Petroleum Institute (API), the American Fuel & Petrochemical Manufacturers (AFPM) and the National Association of Manufacturers (NAM) joined the federal government’s side of the case as intervenors, explaining that the lawsuit was a “direct threat” to their businesses. The intervenors and the Justice Department repeatedly filed motions to have the case dismissed, but federal judges ruled against them and allowed the lawsuit to proceed.

The lawsuit has been in the discovery phase since the start of the year, a period when each side seeks documents, deposes witnesses and gathers other evidence to build its argument. The  fossil fuel lobbies’ departure from the case appears to shield them from that process. But the plaintiffs’ lawyers plan to “to depose representatives of the U.S. government defendants, and we have served them with notice of some of those depositions,” said Julia Olson, co-lead counsel for the plaintiffs and executive director of Our Children’s Trust, an Oregon-based environmental group.

It remains unclear if the plaintiffs will seek to depose Secretary of State Rex Tillerson. Tillerson, formerly chairman and chief executive of ExxonMobil, also served as president of API. Both entities spent millions of dollars on campaigns to sow doubt among the public and lawmakers about climate change. Olson said that the plaintiffs have not served Tillerson with a deposition notice yet.

The information the plaintiffs gather in the discovery phase could potentially damage the reputation of the government or the fossil fuel industry long before the court renders a decision. “Evidence will be made public at trial, and possibly before,” Olson said.

The plaintiffs in Juliana argue that the federal government has known for at least 50 years that combustion of fossil fuels adds carbon dioxide to the atmosphere and changes the climate. Because it chose not to limit fossil fuel use and cut greenhouse gases, the government violated the plaintiffs’ right to protection from environmental degradation under the trust doctrine, the suit alleges.

Talking to Children About Climate Change