Property Values Will Go “Underwater” Before Going Under Water

How long before a particular coastal area goes ‘underwater’ is a question I get asked all the time.  I like to explain that there are essentially three ways that property will go underwater: temporarily, permanently, or figuratively in anticipation of actual flooding. 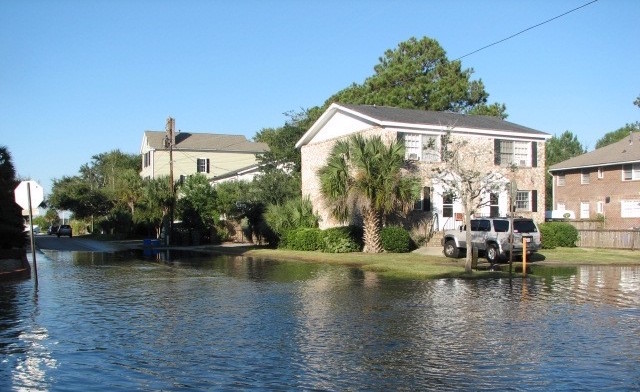 The temporary flooding is most dramatic, like the typical storm surge, with hurricanes being the powerful version. We all have seen images of shorelines breached during named storms like Katrina, Sandy, or Matthew. It is quite unpredictable as a major storm could spin up on short notice, in most coastal areas. Such flooding from storm waves, “surge” or even heavy rainfall events, soon recedes usually within hours. Such weather events, or “acts of god” are something we have always lived with. They can have a modest effect on property values, particularly if they occur frequently.

Another type of temporary flooding these days follows the pattern of extreme high tides, often referred to as “king tides.” These above normal water levels on the ocean, in bays and up tidal rivers and waterways are variations in the daily ups and downs, primarily due to the relative position of the sun and moon, exerting gravitational pull on the oceans, causing a tidal bulge. Such extreme tides are totally predictable by location, height, and to the minute since they follow the roughly nineteen year tide pattern that has been observed for centuries. Such tidal flooding recedes in less than an hour. The problem is that their patterns or high water marks are creeping higher and higher, breaking all records of normalcy going back centuries. The change agent for the tides rising higher and higher, is rising sea level.

Sea level is creeping ever higher, decade by decade, driven largely by the melting of the glaciers and ice sheets on land. The phenomenon is accelerating due to the warmer temperature, particularly in the High Arctic. Rising sea level is now unstoppable, due to the warmer oceans. Globally the sea is about one and a half degrees Fahrenheit (one degree Celsius) warmer than it was a century ago. That excess heat will certainly melt more ice, causing sea level to rise.

Thus we need to consider property going underwater temporarily in the traditional way with storms, being different from property going underwater permanently due to rising sea level––permanently as in thousands of years. We have great trouble accepting this because sea level has never been higher for all of human civilization. In fact, the last time that sea level was higher than now, was 120,000 years ago, when the ocean was about 25 feet (7 m) higher. Because of the excess heat stored in the sea, the polar ice will almost certainly melt, eventually raising sea level back to that height.

In addition to the distinction between land or buildings going underwater temporarily or permanently, there is a third way that real estate will go “underwater.” It can and will go underwater in the sense of its value. Here I use the term figuratively, in the common use way that any asset can be “upside down” in terms of what we have invested in it, and what the market deems that it’s worth. Due to rising sea level, there is a powerful, but not-so-obvious effect on property values that is quite different from physical flooding, both the temporary from storms and high tides, and the long-term literal inundation from rising sea level.