Most assume that properties right on the coast are most vulnerable to rising sea level, but in many places, those much further inland will flood first. Properties right on the shore are often more than ten feet (3 meters) above sea level and might be safe for many decades. There is often a natural ridge or beach berm right on the edge of the sea, based on ancient coral reefs, sand dunes, or resilient clay cliffs.

This is a fairly common profile: relatively high land near the ocean, with the height falling off rather quickly moving inland, often descending to a marshland, swamp, river, or inland waterway. There the land is usually just a few feet above sea level. 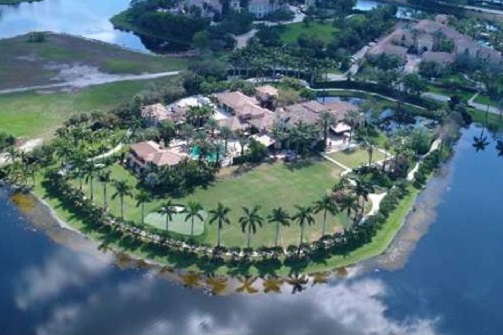 Estate in Weston, FL on the edge of the Everglades

In South Florida, miles inland, at the legendary Everglades, the land actually meets the water. That is where South Florida will go underwater first as the sea rises. It may be a few miles or as much as ten miles inland. It totally surprises people to realize that communities, homes, and factories miles inland will be the first to go underwater.

Tidal rivers, rivers that have no restrictions such as locks or waterfalls, can bring sea level far inland, more than a hundred miles in some cases. For example, Sacramento, California, Washington, D.C., Hartford, Connecticut, and London, England are all far from the ocean. Yet each of them is on a tidal river and very exposed to flooding with rising seas.

As sea level rises faster and faster, mostly due to the melting ice on land it becomes very important to set aside the myth that distance from the ocean is the critical factor. The relevant factors are absolute height above sea level and the physical connection to the sea. Water will find a way. It might be through marshlands, canals, up a stream or river, or even through porous rock.

The point is that we need to get educated and understand the often surprising facts as we try to plan and adapt to unstoppable rising sea level.