Rushing to catch up after decades of stagnation, China built a gargantuan collection of cities the size of nations with barely a pause to consider their toll on the environment, much less the future impact of global warming. Today, the region is a goliath of industry with a population exceeding 42 million.

But while prosperity reshaped the social and cultural geography of the delta, it didn’t fundamentally alter the topography. Here, as elsewhere, breakneck development comes up against the growing threat of climate change. Economically, Guangzhou now has more to lose from climate change than any other city on the planet, according to a World Bank report. Nearby Shenzhen, another booming metropolis, ranked 10th on that World Bank list, which measured risk as a percentage of gross domestic product. 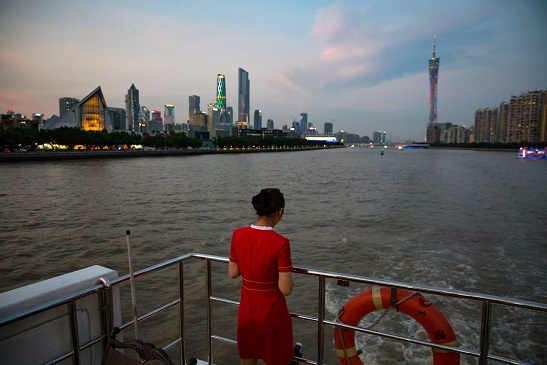 While it is difficult to attribute any single storm or heat wave to climate change, researchers say there is abundant evidence that the effects of climate change can already be seen — in higher water levels, increasing temperatures and ever-more severe storms. And climate change not only poses a menace to those who live and work here, or to the immense concentration of wealth and investment. It is also a threat to a world that has grown dependent on everything produced in the area’s factories.

“What climate change says is that if you want to maintain the city as a good place to live and work for everyone, business as usual won’t do,” said Robert J. Nicholls, a professor of coastal engineering at the University of Southampton in England. He helped write the World Bank report that warned of the fiscal impact of climate change on the Pearl River Delta. “Disasters will become more likely. And the last thing the Chinese want is a Katrina event,” he added, referring to the hurricane that devastated New Orleans in 2005.

“The challenge for the Chinese, as it is for so many others,” he said, “is taking the long view.” Which shouldn’t really be so hard, considering the recent past. The government estimated regional losses from last summer’s floods alone at $10 billion. For all of 2016, rainfall in China was 16 percent above average.

That was the highest level in recorded history.

Read the full article at The New York Times.