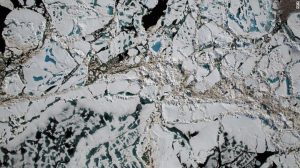 “For what appears to be the first time since scientists began keeping track, sea ice in the Arctic and the Antarctic are at record lows this time of year. “It looks like, since the beginning of October, that for the first time we are seeing both the Arctic and Antarctic sea ice running at record low levels,” said Walt Meier, a research scientist with the Cryospheric Sciences Laboratory at NASA’s Goddard Space Flight Center, who has tracked sea ice data going back to 1979. While record low sea ice is nothing new in the Arctic, this is a surprising turn of events for the Antarctic. Even as sea ice in the Arctic has seen a rapid and consistent decline over the past decade, its counterpart in the Southern Hemisphere has seen its extent increasing.

In fact, each year from 2012 through 2014 reached a record high for Antarctic sea ice extent. Skeptics have long pointed to ice gain in the Southern Hemisphere as evidence climate change wasn’t occurring, but scientists warned that it was caused by natural variations and circulations in the atmosphere. While it is too early to know if the recent, rapid decline in Antarctic sea ice is going to be a regular occurrence like in the Arctic, it “certainly puts the kibosh on everyone saying that Antarctica’s ice is just going up and up,” Meier said. The decline of sea ice has been a key indicator that climate change is happening, but its loss, especially in the Arctic, can mean major changes for your weather, too.”