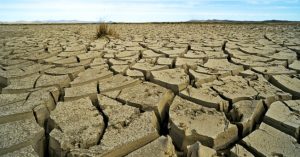 “Another day, another dire warning about the global climate emergency. The National Aeronautics and Space Administration’s (NASA) top climate scientist announced Tuesday that the Earth is warming at a pace not seen in at least the past 1,000 years, making it “very unlikely” that global temperatures will stay below the 1.5 C limit agreed to in the landmark climate treaty negotiated in Paris last December. “In the last 30 years, we’ve really moved into exceptional territory,” Gavin Schmidt, director of NASA’s Goddard Institute for Space Studies, told the Guardian. “It’s unprecedented in 1,000 years. There’s no period that has the trend seen in the 20th century in terms of the inclination [of temperatures].”

“Maintaining temperatures below the 1.5 C guardrail requires significant and very rapid cuts in carbon dioxide emissions or coordinated geo-engineering,” he continued, referring to controversial environmental manipulations. “That is very unlikely. We are not even yet making emissions cuts commensurate with keeping warming below 2 C.” The announcement comes amid a growing body of research—month after month after month—that shows 2016 is shaping up to be the warmest year in recorded history.”