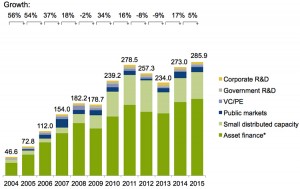 “Global investment in renewable energy reached record levels in 2015, according to a new report from the UN Environment Programme (UNEP) and Bloomberg New Energy Finance (BNEF). More surprisingly, perhaps, the report shows that the $286bn poured into green energy was more than double the spending on coal– and gas-fired power.

It also shows, for the first time, that more renewable power capacity was added than other sources and that renewable energy investment was mostly in developing countries. Carbon Brief runs through the key findings in seven charts.”