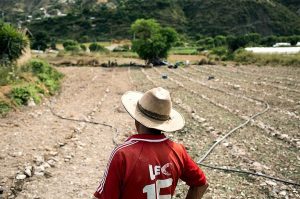 “Santa Cruz del Quiché, GUATEMALA—For many, the term “climate change” brings to mind the image of a polar bear on a shrinking sheet of ice somewhere far off in the Arctic. Consider another image: A tired farmer looks out fearfully over a craggy field and wonders how he’ll grow the crops to keep his family fed. Pedro Esteban is that farmer, and to him, climate change is no abstraction. His family has farmed the Guatemalan highlands for generations, and climate change is the phenomenon that yearly forces his kin to cut production as the water sorely needed to irrigate their fields comes up short time and again. Unlike large-scale agribusiness, Esteban farms for his own sustenance and sells whatever is left over, so any reduction in cultivation cuts quickly into his family’s well-being. “It’s really tough,” he says, alternating between Spanish and the indigenous K’iche’. He estimates that his family used to grow twice as much as it now can.

Guatemala is hardly the only place where small-scale farmers are confronting climate change. Worldwide, an estimated 2.5 billion people depend on small-scale farming, which the United Nations says is particularly vulnerable to changes in the environment. But a novel project here called MásRiego (“more irrigation”) has put the Guatemalan highlands on the map as the epicenter of the struggle to protect the livelihoods of farmers like Esteban. The idea is simple: Water is what farmers are running out of, so the solution is to stretch available water resources as far as possible. Essentially an array of hoses punctured at intervals with tiny holes and set along the bed of a garden or field, drip irrigation systems are designed to pinpoint and apply water precisely where it’s needed for a crop to grow best. Over the next three years, MásRiego aims to distribute 3,000 drip irrigation systems to farmers across the Guatemalan highlands and to train them to use and maintain the systems on their own. It’s a tall order in a region of the country only now recovering from the decades-long civil war that decimated people and infrastructure, but if it succeeds, MásRiego could become a major model for farmers struggling against climate change the world over.”