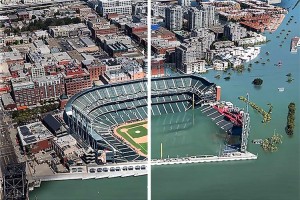 What sea level rise could look like at the AT&T Park in San Francisco. Photo credit: Climate Central