There is More Plastic in Our Oceans Than We Thought

Read the full article at http://ecowatch.com/ 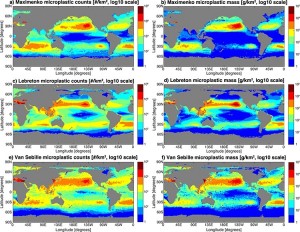 The 5 Gyres Institute co-authored this study which is the most comprehensive estimate of small plastics in the world’s oceans. There were two other papers published earlier, one by Cozar (2014) and Eriksen (2014) using separate data sets.

The paper published last week in Environmental Research Letters, A Global Inventory of Small Floating Plastic Debris, uses three ocean models and every dataset published since the 1970s. With 10 authors contributing to it, it’s the best so far. This new study suggests there are 15 to 51 trillion microplastic particles in the world’s oceans, weighing somewhere between 93 and 236,000 metric tons. This is roughly seven times more than what we thought before.

Read the full article at http://ecowatch.com/