Farming Solar Power in the Cosmos

Read the full article on http://www.takepart.com/ 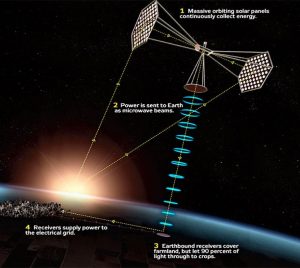 “Aboard an imaginary space station surrounded by distant planets, an astronaut on the fringes of human life toiled to turn the sun’s rays into electricity and then zapped it through space and back to the planets to be used as a power source. “Our beams feed these worlds energy drawn from one of those huge incandescent globes that happens to be near us. We call that globe the Sun,” the spaceman says in one of Isaac Asimov’s earliest works, the 1941 science fiction short story “Reason.”

What was then an implausible idea—collecting solar energy in space and sending it to Earth—is now the goal of scientists around the world, marking a new space race that could end reliance on dwindling fossil fuels, fundamentally shift power in the geopolitical conflicts they have sparked, and meet the rising demand for energy from the developing world. Paul Jaffe, a spacecraft engineer and principal investigator at the U.S. Naval Research Laboratory in Washington, D.C., has brought the U.S. closer to that goal with his work on space solar technology, which has drawn international attention—and for good reason: The innovation would have a profound impact on humanity. “In countries right now where they’re trying to deal with poverty, water scarcity, poor health, lack of education, and political instability—these are all things you need energy in order to fight,” Jaffe told TakePart.”

Read the full article on http://www.takepart.com/